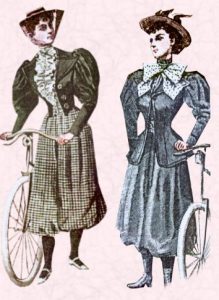 Susan Stamnes says Eliza Jane from 1895 is one of her favorite finds so far on the OTMP journey. The lyrics are credited to Winthrop Packard. She’s guessing Winthrop was not sympathetic to the suffrage cause and the scandalous tone of his lyrics are genuine. However, when we read the lyrics or hear this song today through a filter of history, the irony of that view considering how things turned out is all the more interesting. Now we laugh at the writer and not Eliza. What do you think? Was it originally intended as tongue in cheek or serious?

From the Library of Congress: Songs of Women’s Suffrage. “In the 1850s suffragists Amelia Jenks Bloomer (who later moved to and died in Council Bluffs, Iowa) and Elizabeth Smith Miller pioneered unrestrictive clothing for women that included a short skirt over loose trousers, dubbed the “Bloomer costume” by the press. This was considered shocking at the time and the change was not immediately successful. A song illustrating the public reaction to the proposed women’s dress is “The Bloomer’s Complaint,” published in 1851. With the introduction of the safety bicycle (the first modern bicycle) in the 1880s, women found a need for clothing that would allow them the freedom to ride. 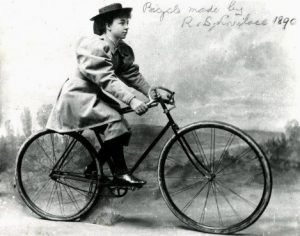 Susan B. Anthony was quoted in an interview as saying, “I’ll tell you what I think of bicycling. I think it has done more to emancipate woman than any one thing in the world. I rejoice every time I see a woman ride by on a wheel. It gives her a feeling of self-reliance and independence the moment she takes her seat; and away she goes, the picture of untrammelled womanhood.”[1] Women on bicycles were the object of humorous songs, some risqué, that marveled at the sight of a woman in trousers. “Eliza Jane,” is a song published on a song sheet in 1895 that brings together the bloomers, the desire to vote, and the freedom of riding a bicycle, with lyrics that explain the scandalous risks the young lady was taking.

“I love falling down rabbit holes to learn about things I never thought about before!” So says Glenda during our first meeting to discuss a plan of action for our Old-Time Iowa Music Project. The mission: to bring voices of the past to life by learning to perform diverse native and settler Iowa songs from the nineteenth century. We plan to document songs that were performed in formal and/or casual settings, particularly with topical content appropriate for all ages. A secondary mission: to increase the level of instrumental musicianship with “old-time” workshops on simple instruments such as mountain dulcimer and wash-tub bass. We may also compose original music within this theme and collaborate with local musicians who have an expertise in old-time music.