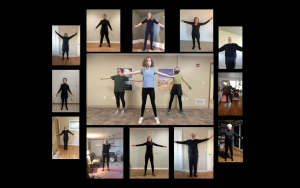 After Covid canceled in-person choir rehearsals and performances in Spring 2020, the Family Folk Machine mobilized to create a virtual choir version of what would have been the May 2020 concert, “One Planet.” Directors created guide tracks, rehearsals were held on Zoom, singers and instrumentalists recorded their parts at home, Jean and Gayla edited the resulting audio, and videos were created by Susan Spears, Susan Stamnes, and Aprille Clarke. It was a long, complicated process, but it was also fun. Lots of FFMers learned lots of new skills! The One Planet songs were split into three online concerts, with premieres November 22, 2020; January 1, 2021; and March 21, 2021. You can find these concerts on YouTube! The concerts were met with enthusiastic acclaim from Folk Machinists, friends of the FFM, and strangers.

The Family Folk Machine is grateful to three granting organizations for financial support of the Virtual Choir project. The project, of course, incurred expenses that we never would have anticipated, and these grants allowed us to do our best work under trying circumstances. Many thanks to
The City of Iowa City Public Art Program
The Community Foundation of Johnson County
and to Governor Kim Reynolds and the Iowa Arts Council, a division of the Iowa Department of Cultural Affairs, through the federal CARES Act. 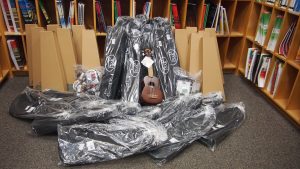 About the Project
In the words of an FFM kid: “To learn to play and perform on an instrument for the first time is very empowering. It opens a door for kids, creatively. It will help kids develop knowledge about chords, musical structure, and pitch. When I learned to play the ukulele, it broadened my horizons as a songwriter. There’s something more concrete about writing a song and putting chords to it than if you’re just humming a melody in your head. It gives you the power to make a full sound by yourself.”

With a comprehensive program of instrument instruction funded by the Community Foundation of Johnson County with an in-kind donation discount from West Music, the Family Folk Machine is hoping to instill in the kids a confidence in self-expression, a belief in their value and their abilities, and a concrete example of learning to do something hard—on your own, but supported by a community of other learners. We’ve already seen great results—in general musicianship, in songwriting independence, and in musical engagement—from some of our older FFM kids who have learned to play the ukulele.

Wasn’t That a Time

About the Project
The Family Folk Machine, supported by a major grant from the Iowa Arts Council, engaged in a songwriting project in collaboration with the Awful Purdies. During Fall 2016 we gathered stories from Folk Machinists, Senior Center groups, and community members using the Story Circle technique developed by the Awful Purdies for “All Recipes Are Home.” In January and February, the Awful Purdies led the FFM in a series of songwriting workshops, using images or phrases from these stories as song seeds. We created ten brand-new songs in our workshop groups! The Family Folk Machine performed the songs at a Senior Center concert on April 30, 2017, and the project culminated in a joint FFM/Awful Purdies concert on Saturday, June 3 on the Main Stage at the Iowa Arts Fest. Click on the link below to access the Wasn’t that a Time project: http://time.familyfolkmachine.org/

In 2015, the Family Folk Machine in collaboration with The Iowa City/Johnson County Senior Center received funding from the Community Foundation of Johnson County to create a music video of the Tom Chapin song “Brown Gold.” The song promotes composting in a fun and catchy way, tracing the natural cycle of seed to plant to human consumption to compost-rich soil. Partners included the New Pioneer Co-op and the Iowa City Recycling Center. The video was shot and edited by Senior Center volunteers and recorded by Luke Tweedy of Flat Black Studios.