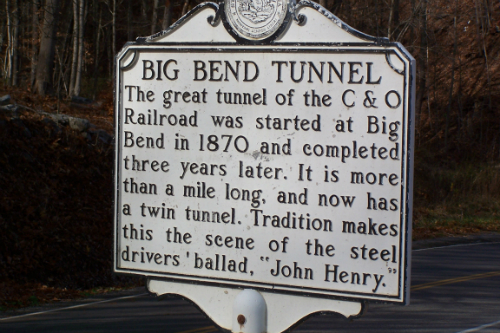 John Henry is a great song. Apparently the legend of John Henry expressed in this song is based on a true story, one that took place in the 1870s. The song is so well-known and well-loved that there are multiple versions of it that musically refer to the text rather than singing it all, like this fiery rendition by Gillian Welch and the Old Crow Medicine Show:

According to the legend, John Henry was an African American steel driver, working on railroad tunnels. The steel drivers would hammer a steel spike into the side of a mountain. They were accompanied by a “shaker,” who would hold the spike in place (fun job, I bet) and turn it between hits. Once they had created a decent hole, the “blaster” would fill the hole with explosives and rip a chunk out of the mountain. Then the steel driver would start over. Aside: can you believe they carved railroad tunnels out of mountains like this? If it were up to me, we’d all still be living in caves.

We get to learn about this history of tunnel-making only because the real point of the song has resonated with so many people over the years. A steam drill is invented and threatens to take the jobs away from the steel drivers and shakers.

“John Henry told his captain
‘A man ain’t nothin’ but a man,
but before I let your steam drill beat me down
I’d die with a hammer in my hand.'”

John Henry wins the contest against the steam drill, but he works so hard to do it that he lays down his hammer and he dies. If you want to know more about the legend, there is a good amount of writing about this song online.

I wanted to include this song in our program this spring partly because it is so fun to sing and partly because Steve Earle mentions John Henry in “Steve’s Hammer (for Pete).” We have quite a few nice interconnections between our songs this spring, which helps the program stick together. “John Henry” helps to fill out the social justice theme with its emphasis on the dignity of human work, strength, and determination.

The idea of pushing back against technology has made this song ripe for parody versions. The Brothers Four sang this version, in which John Henry is a “thinking man” challenging a computer:

And Garrison Keillor has a hilarious parody in which John Henry is a poet armed with a no. 2 pencil, racing a laptop computer that freezes and has to be rebooted:

The place of John Henry as a cultural touchstone is nicely shown in this beautiful Gillian Welch song about Elvis (and the death of Elvis):

Elvis is “all alone, in a long decline,” and his thoughts turn to John Henry:

In the words of Neil Young, it’s better to burn out than it is to rust. Rest in peace, Elvis and John Henry both.