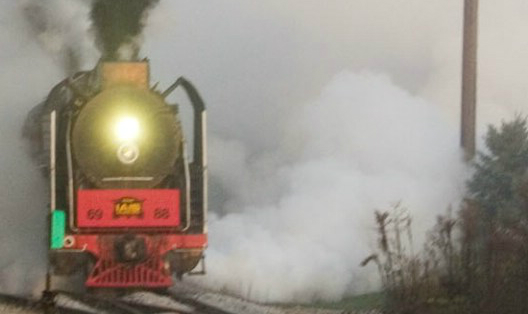 My original plan was to program “Midnight Special” last fall with our other train songs, since the Midnight Special is, well, a train. But as I thought about the words more, I started to like the idea of moving it to this spring, with our focus on social justice.

The song is told from the perspective of a prisoner (a prisoner who has to work all day without any breakfast, according to one of the verses). Legend had it that if the lights of the Midnight Special shined on you in your cell, you would be released from jail.

We know “Midnight Special” because of Huddie Ledbetter, better known as Lead Belly. Reading about Lead Belly this winter, I realized something. I think of Pete Seeger as not just a great songwriter, but as a great spreader of songs. He knew how to keep good songs alive, and there are tons of songs that we know now because he sang them. What I realized was that Lead Belly was to Pete Seeger what Pete Seeger was to us; Lead Belly was a walking encyclopedia of songs, and he transmitted many of those to Pete, Woody, and the other folk singers hanging out in New York in the years before the second World War.

Lead Belly was born in rural Louisiana in 1888. His family were sharecroppers, and he grew up picking cotton. Lead Belly was ambitious and saw music as his path to a better life. He spent two different periods of time in prison (Sugarland and Angola, both notorious; in the Lead Belly version of “Midnight Special” he mentions Sugarland) and tried writing songs to the governor to get a pardon (some say it worked).

“If you ever go to Houston, you’d better walk right/you’d better not squabble, and you’d better not fight.” Or else, you’ll be arrested and sent to Sugarland, as the song goes. Although this song was probably being sung in prisons one hundred years ago, this verse sounds like the experiences African Americans report now about being subject to extra surveillance from law enforcement. Lead Belly’s niece, Tiny Robinson, expounded on this theme:

“Lead Belly had a very close feeling to all of his songs. He felt he had much more to sing about besides chain-gang songs. Some of the things were about the environment which he was brought up under. Don’t do this, don’t do that, be careful what you say, and where you go, you have no right walking down that road where those folks live, and stay on this side where you belong. He was connected with those series of episodes soon as he was able to walk a block by himself. ‘I have my people to sing about. The way they struggle and nothing seems to be coming their way. Nothing was done to improve the matter. The violent grasp was too strong for us to escape. So we had to sing about them.’” (from the Smithsonian Folkways Lead Belly box set)

Like many great songs, “Midnight Special” combines the specificity of particular life circumstances with a universal theme–in this case, the hope for freedom and release. “Let the Midnight Special shine its ever-lovin’ light on me.”