“Peace Will Come”: concert on November 9! 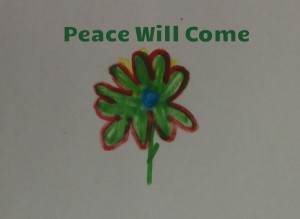 The Family Folk Machine is excited to present “Peace Will Come,” songs for imagining peace, at 3 p.m. on November 9 in the Assembly Room at the Senior Center in downtown Iowa City.

Our program includes favorites from the tumultuous yet peace-loving era of the 1960’s and early ‘70’s, like Bob Dylan’s jewel, “Chimes of Freedom,” the Youngblood’s lovely “Get Together,” Cat Stevens’ “Peace Train,” Phil Ochs’ energetic hope for a new day, “What’s that I hear?” and John Lennon’s “Imagine,” alongside newer songs from Greg Brown and Dan Zanes and traditional folk songs from several corners of the world. The kids of the Folk Machine have crafted new verses to add to John Bell’s peace-themed version of the folk song “Deep Blue Sea,” and several of the kids will be enriching our concert by playing instruments.

Look for an article about the concert in the Press-Citizen’s Community Music column in Sunday’s paper (soon to appear on the FFM website as well).

The concert is free and will be followed by a celebratory reception.

The Family Folk Machine will be one of the featured acts at the Englert’s Festival of Carols on Tuesday, December 9, at 7:00 p.m. This fun and free event also includes a visit from Santa, a reading of ‘Twas the Night Before Christmas, and cookies and cocoa!