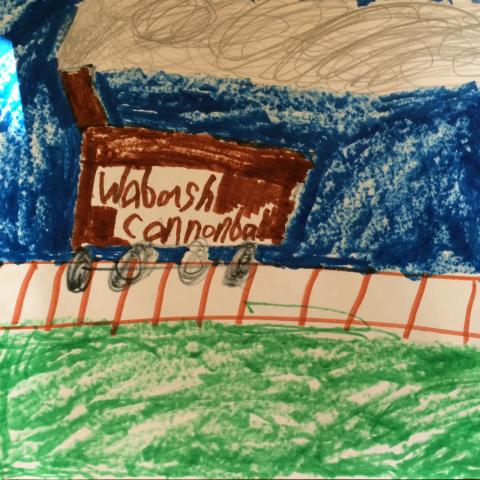 by Aprille Clark and Miles Crall

“The Wabash Cannonball,” originally published in 1882, is the oldest song in the Rock and Roll Hall of Fame’s 500 Songs that Shaped Rock and Roll. The first documented version was entitled “The Great Rock Island Route” and was written by J.A. Roff. Many other artists, including the Carter Family, Bing Crosby, Woody Guthrie, and Roy Acuff, have recorded versions. It is very popular among college marching bands.

Historians agree that the Wabash Cannonball is fictional, though there are several theories as to the origin of the legend. One states that hobos described a mythical train called the Wabash Cannonball, which was a death coach that carried hobos away to the afterlife. Another possibility is that the song is based on the story of Cal S. Bunyon, brother of Paul Bunyon, who constructed a railroad called the Ireland, Jerusalem, Australian, and Southern Michigan Line. The amazing train that traveled the line went so fast that it arrived at its destination an hour before its departure. Its earthly route ended when it shot into outer space, where some hobos believe it is still chugging along.

Many variations of the song exist, as performers often customized the lyrics to suit themselves. For example, a character appears who is called Daddy Cleaton, Boston Blackie, or Daddy Claxton. “Daddy Cleaton” may refer to a Tennessee politician. “Boston Blackie” is a fictional detective created by author Jack Boyle. “Daddy Claxton,” as we sing in our version, is a self-referential addition by Roy Claxton Acuff.

Miles (age 7) says, “I like the song because I’ve ridden on a train, and it’s really fun, and I know the song really well. My favorite verse from another version is the first one. It’s something like, ‘From the great Atlantic ocean to the wide Pacific shore / the queen of flowing mountains to the southbound by the door. / She’s mighty tall and handsome, known by one and all. / She’s a regular combination called the Wabash Cannonball.’ My favorite verse from our version is the second one. It’s one of my solos, and it talks about Minnesota, and that’s where [Aunt] Suzy and [Uncle] Joe live, and it reminds me of them: ‘through the hills of Minnesota.’ ‘Where the rippling waters fall’ reminds me of the ocean.”